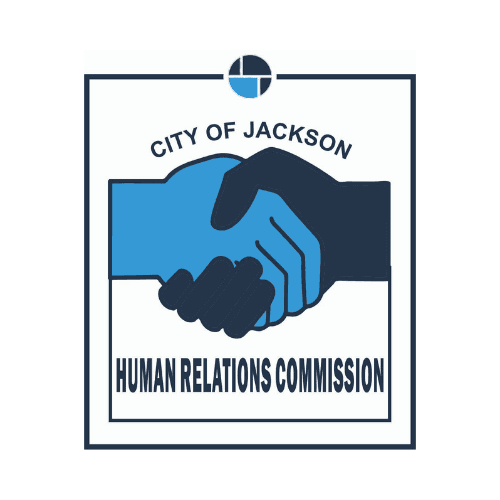 The mission of the City of Jackson Human Relations Commission is to empower and promote a diverse, inclusive, and equitable city.

To serve as an official agency of the City of Jackson, responsible for advising and making recommendations to the City Manager and City Council concerning good human relations, combating discrimination within the community wherever it exists, and for acting to promote needed change.

The latest meeting information is posted on the City Meeting and Event Calendar.

View Most Recent Agendas and Minutes

The Human Relations Commission (HRC) was established as a part of the City of Jackson government on November 19, 1963. The commission is comprised of nine members, of which at least five must be residents of the City while others may reside in Jackson County. A diversity balance is sought among members to allow for a fully representative body reflective of the City's population.

The City of Jackson Human Relations Commission has released an anti-racism statement. The statement was confirmed at the commission's meeting on Wednesday, July 15, 2020. This is the full statement:

“We, the members of the City of Jackson Human Relations Commission, categorically condemn racially based prejudice, oppression and violence. Unequivocally, we are committed to fair and transparent treatment and equal justice for all residents of the City of Jackson. We stand with the protesters, a vast majority of Americans, who agree that Black Lives Matter. Justice matters. Fairness matters. Equality under the law matters and transparency matters.

Systemic racism is defined in the United States of America as: systems and structures that have procedures and/or processes that disadvantage African Americans. Recent local and national events have highlighted the continued presence of systemic racism in the United States. It camouflages itself across those procedures and systems within our communities including but not limited to: education, quality health care, the criminal justice system, employment, housing, etc. These systemic issues, have been historically targeted towards the African American community and have made it challenging for African Americans to fully participate in society and the economy.

We, as the City of Jackson Human Relations Commission, stand with all our residents. We are here to promote mutual understanding, dignity, and respect among all racial, religious, and ethnic groups, and work to discourage and prevent discriminatory practices against any such group.

We invite you to contact us with your concerns, ideas, and initiatives and we look forward to continued dialogue and an opportunity to share these collective efforts with you.  We are your emissaries in ushering in a more just, compassionate, and equitable City of Jackson.”

We, the City of Jackson Human Relations Commission, applaud the courage of the jury in George Floyd’s murder trial for being willing to make the right choice. We respect the bravery of the civilians and law enforcement officials that refused to stand in silence and we will continue our work to ensure better police community relations in the City of Jackson understanding that improving this relationship in our City is a positive step in the process of eliminating systemic racism throughout our country.

The momentous guilty verdict on all charges regarding the murder of George Floyd in Minneapolis, Minnesota, is a potential step towards better police community relations for the country.

Former Officer Derek Chauvin’s behavior was not; proper police conduct, trained police technique, or acceptable by police standards. Other police officers and their superiors willingly crossed the esoteric “thin blue line” and condemned his behavior indicating that there are law enforcement officials not willing accept or overlook improper police conduct. This deviation from the standard condoning such behavior and/or the deafening indifference of simply professing a disdain for this type of behavior is a step towards healing the relationship between the law enforcement community and communities of color.

Now is a critical time to look closely at the policies and procedures that have guided police conduct and affected police relations with the Black community throughout the history of our country. We must collectively join together to help our nation better understand that the desire to re-evaluate the practices that have brought tragedies and discriminatory treatment to disparate communities is not a desire to eliminate police departments or a statement against law enforcement, but instead a call for impartial and equitable policing for all communities.

“The City of Jackson Human Relations Commission stands in sorrow and solidarity with the Asian and Asian-American Communities who are facing an escalating series of racist attacks throughout the country; these attacks are unjustified. Asians and Asian-Americans have stood on the front lines with all of our communities to help us heal and face the pandemic in our country.

Everyone deserves to feel safe! Everyone has the right to be treated with dignity and respect in the places they live, work, study, play, and worship. As Dr. Martin Luther King, Jr. stated “injustice anywhere is a threat to justice everywhere”. These attacks on our Asian and Asian-American communities are a threat to all of our communities everywhere.

The City of Jackson Human Relations Commission condemns violence and hate of all forms, and calls on our City Officials and community leaders to promote safety, respect, and dignity in the City of Jackson. This means investing in services to meet our communities’ needs and in restorative justice to ensure that there is accountability and healing.

We must allocate resources to organizations that have the trust of and strong connections with our most underserved areas of the city to provide human services, health care, and mental health support. All of our efforts must be inclusive and equitable, from economic relief to vaccine distribution.

We the City of Jackson Human Relations Commission stand with our community to confront racism, injustice, and their root causes. We must continue to work together in solidarity with all communities of color including Asian and Asian-American, Immigrant, LGBTQ+ and others to oppose hate crimes and racism within our city.”

Here we are again. As a nation, we are mourning the killing of another Black man during a routine traffic stop. We, the City of Jackson Human Relations Commission, would like to extend our deepest condolences to Patrick Lyoya’s family. We stand with them as they seek justice and accountability for the unconscionable killing of their loved one.

Mr. Lyoya’s untimely death reminds us of our obligation to create a culture where everyone is afforded the same dignity and respect within their communities. The killing of this young man underscores the continuing and urgent need to re-imagine the approach to community policing in our country fundamentally.

The Human Relations Commission works within the City of Jackson to address the historical disparities faced by communities of color. We will continue to constantly revisit the practices and policies in place to meet our entire community’s need for protection and law enforcement services.

The Human Relations Commission welcomes opportunities to partner with other organizations.