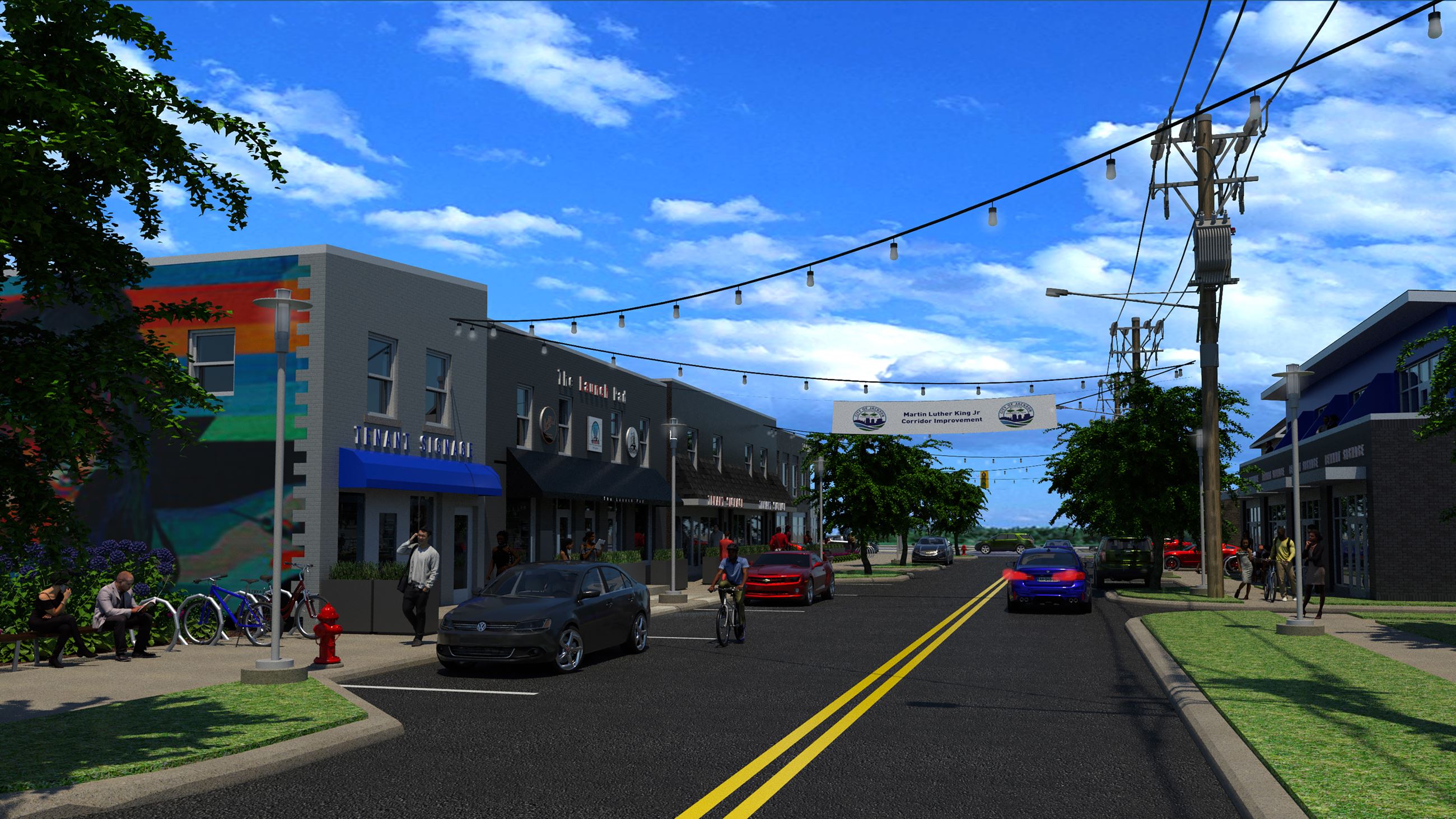 This is a concept graphic of the possible improvements coming to MLK Drive near High Street from the work of the MLKCIA.

About the MLK Corridor Improvement Authority

A Jackson neighborhood is set to see big improvements in the coming years. In 2020, the Jackson City Council voted unanimously to create the MLK Corridor Improvement Authority (also called MLKCIA).

The main goal of the corridor improvement authority is to promote the redevelopment of the MLK Drive and Prospect Street commercial corridors. A portion of tax dollars from the authority district will be used to revitalize the area. A 10 member Board of Directors is assembled to oversee the use of these tax dollars and allocate funds for projects. Proposed improvements are likely to include more commercial businesses, mixed use developments, housing, landscaping, infrastructure and pedestrian access. Planning these improvements takes time, so it's important for residents to know that official projects and locations have not been given final approval.

Current Boundaries of the improvement authority are S. Martin Luther King Jr. Drive from Downtown Jackson to the City Limits at W. South Street and Prospect Street in its entirety from Fourth Street to Cooper Street. Commercial properties along the MLK Equality Trail, Jackson’s main pedestrian trail, are also included in the improvement authority. 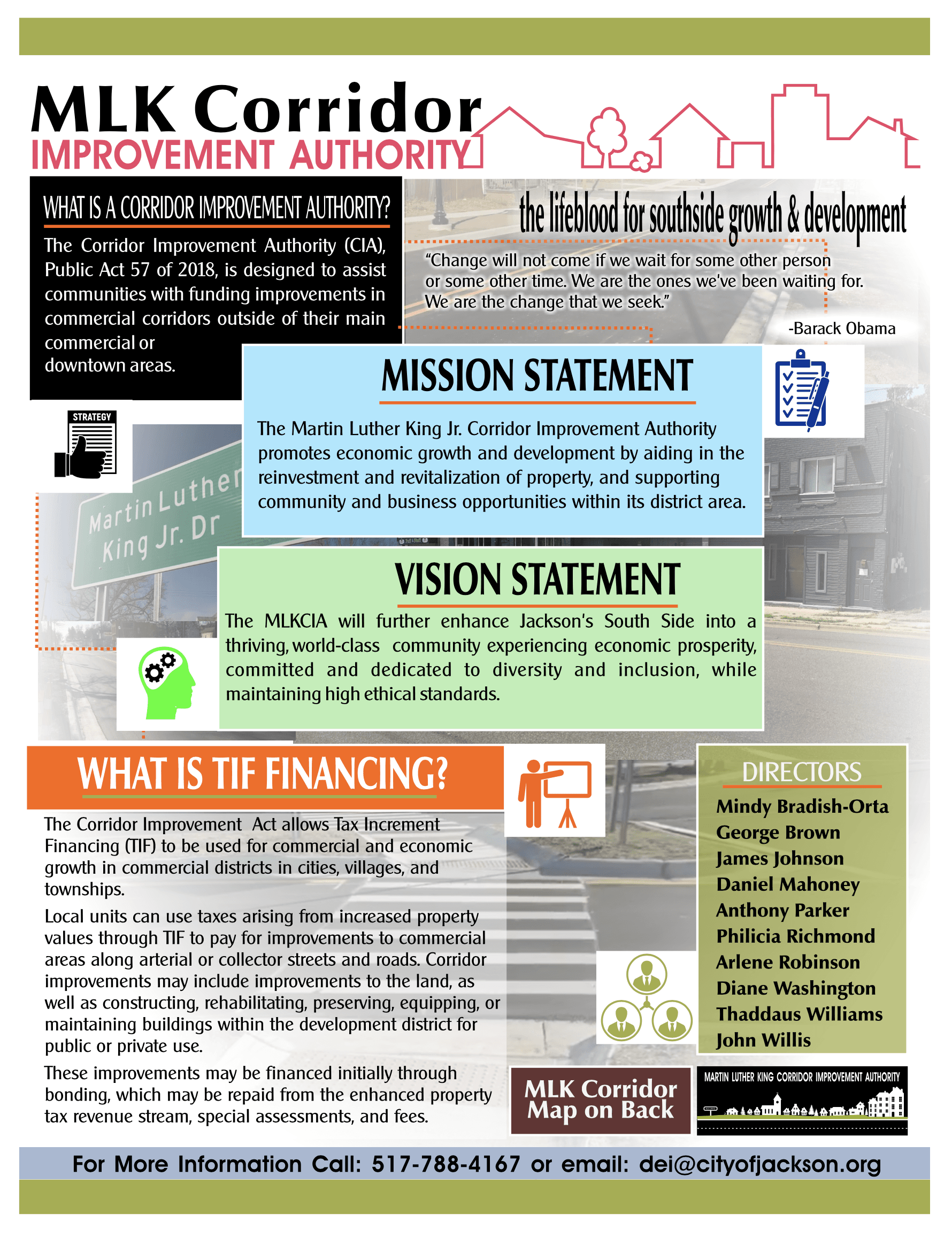 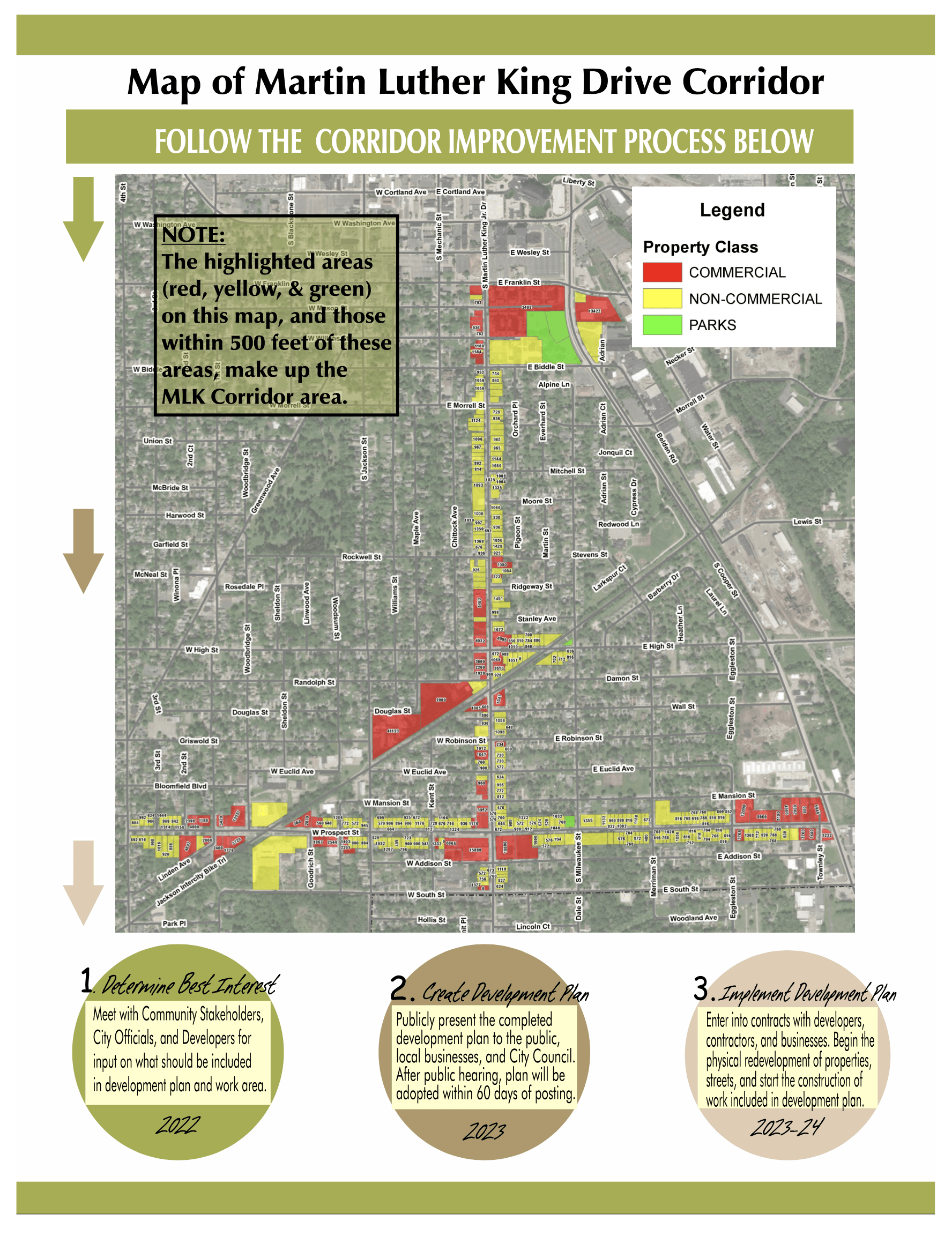 Learn more about the efforts of the MLKCIA:

The MLK Corridor Improvement Authority Board of Directors meetings are generally held the fourth Thursday of every month at 5:30 p.m. unless otherwise noted. Here are meeting dates for 2023:

The latest meeting information is posted on the City Meeting and Event Calendar. Future meeting agendas will be posted in the Agenda and Minutes Center.

An application to serve on the MLK Corridor Improvement Authority Board of Directors is available through the City website.

The Martin Luther King Jr. Corridor Improvement Authority promotes economic growth and development by aiding in the reinvestment and revitalization of property, and supporting community and business opportunities within its district area.

The MLKCIA will further enhance Jackson’s South Side into a thriving, world-class community experiencing economic prosperity, committed and dedicated to diversity and inclusion, while maintaining high ethical standards.